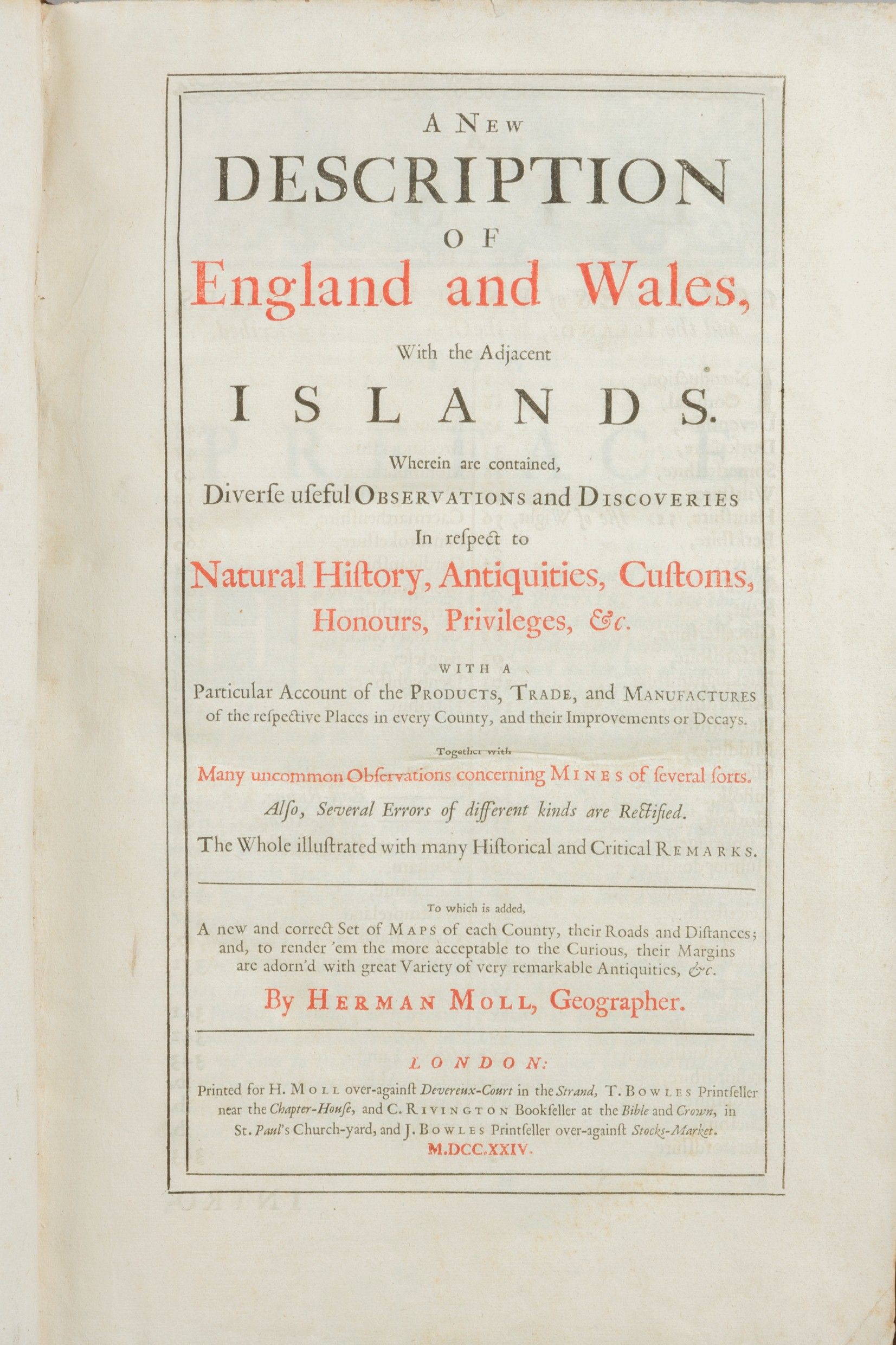 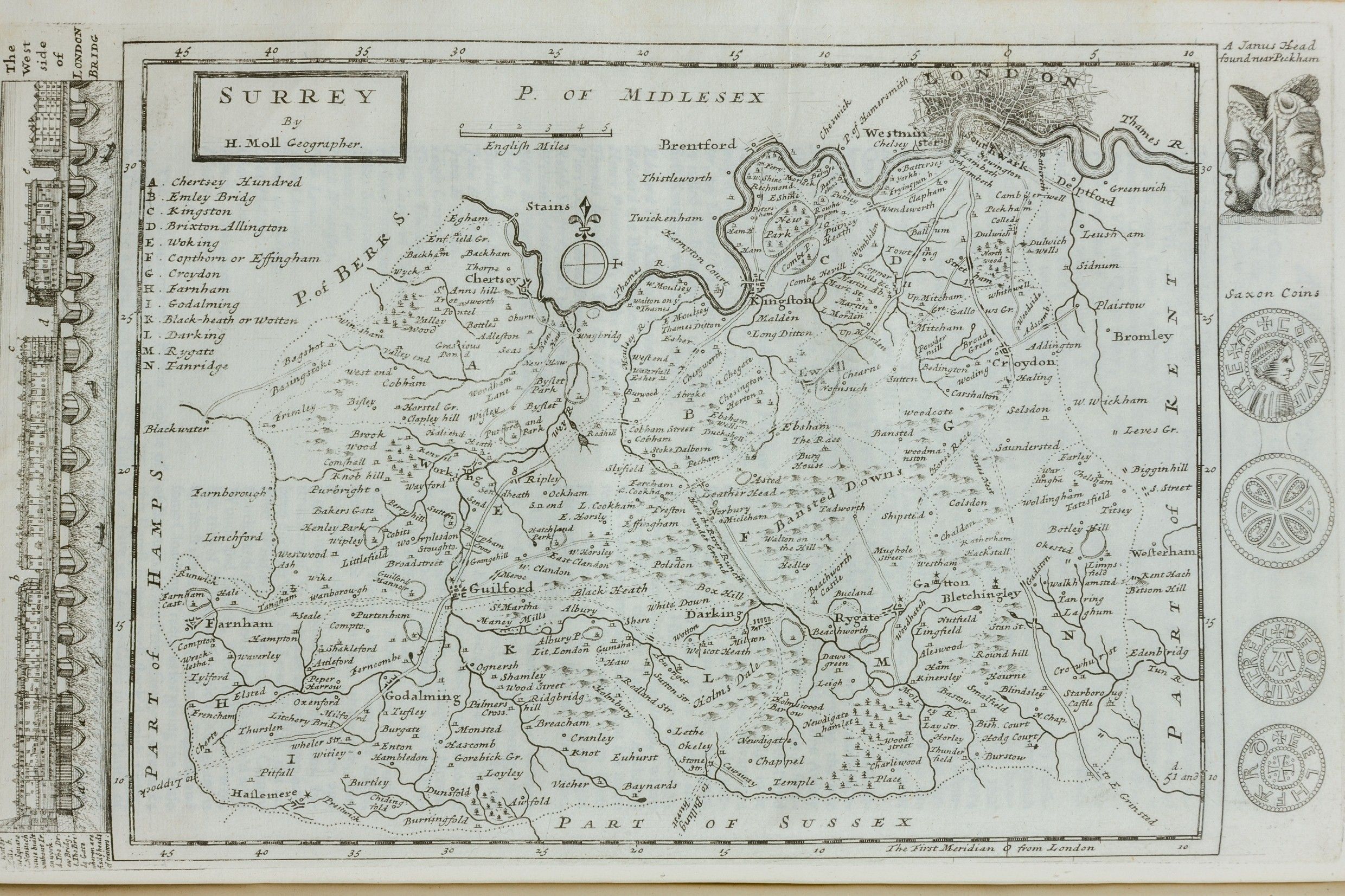 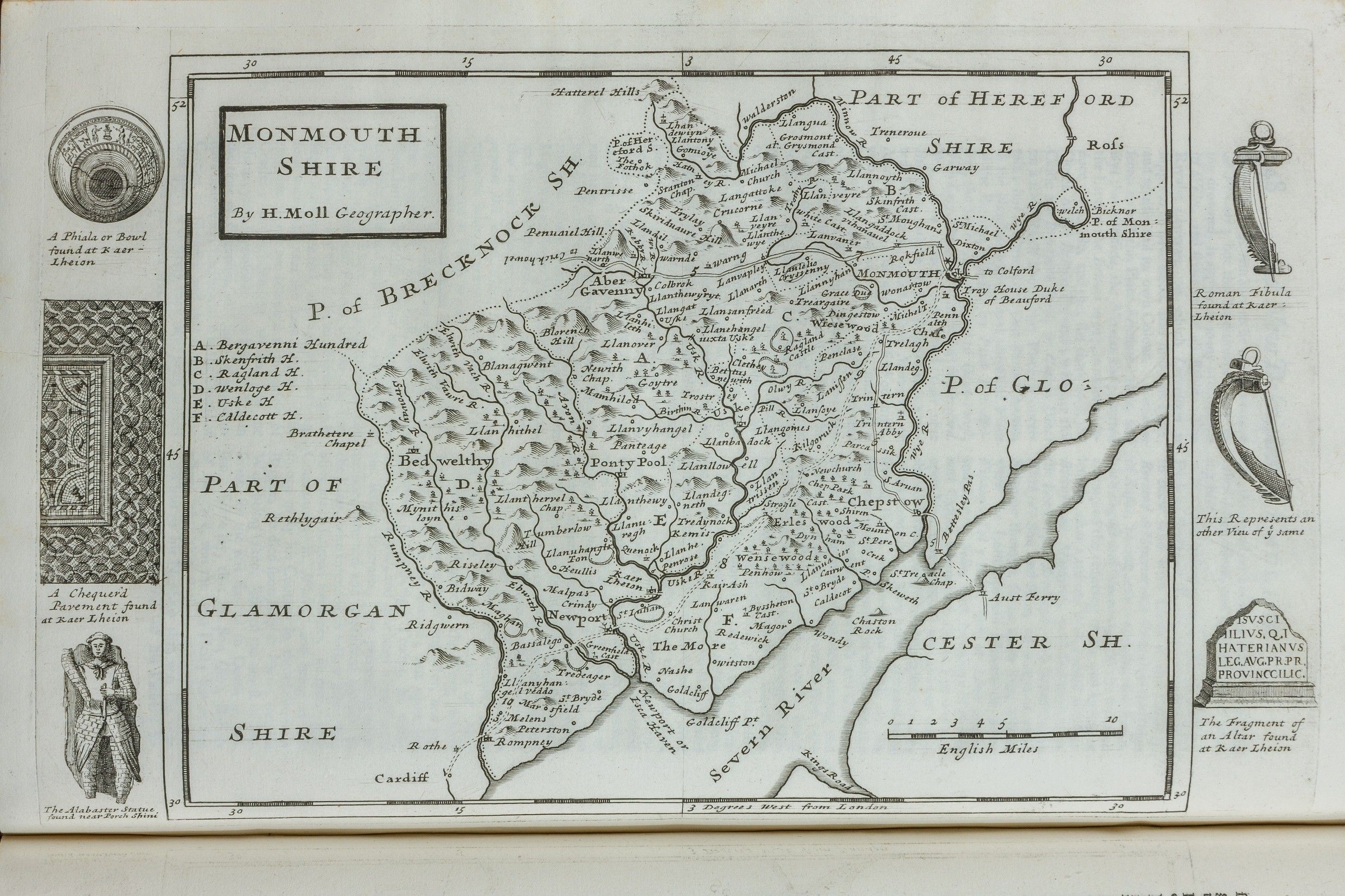 A new description of England and Wales with the adjacent islands wherein are contained, diverse useful observations and discoveries in respect to natural history, antiquities, customs, honours, privileges, &c….To which is added, a new and correct set of maps of each country, their roads and distances: and to render ‘em the more acceptable to the curious, their margins are adorn’d with great variety of very remarkable antiquities, &c…by Herman Moll, Geographer. London 1724. Folio (356 x 233 mm.) First edition. First issue. Title printed in red and black, with 50 engraved maps in their first state, 4 folded, the remainder single sheets, interleaved with many pages of text. Most of the known copies have a known error in which the last text page which should be numbered 344 is numbered 343, including this copy.  Small stain to the map of the West Riding of Yorkshire, otherwise maps and text in fine condition. Contemporary panelled calf gilt decoration to the spine. Title in gilt on maroon label, date in gilt direct. A fine copy of the first edition, without plate numbers.
Only half a dozen examples of this rare edition are known to exist; this one in a fine contemporary binding is outstanding.
It is disappointing to record that what appeared as an excellent project had little commercial success, to which the lack of advertising may have contributed. Within weeks of publication a second issue appeared, with numbers added to the plates, probably to facilitate its marketing as a simple atlas without text, and surprisingly it was this format that proved the most successful. A further edition of The Description was conceived early in 1732 and advertised to be published in 19 weekly parts. An advertisement on 31st August 1733 confirmed the completion of the project, but the absence of any known surviving copies implies that is was a failure and that the proposed publication was withdrawn, maybe influenced by Moll’s death the same year.
When Moll published his New Description he must have considered it a possible competitor to the 1722 edition of Camden’s Britannia with its new reset text and fine large folio maps by Robert Morden. Whatever Moll’s criticism of the 1695 edition of Britannia it must be noted that the latter was published for nearly eighty years, far in excess of the lifetime of the Description. It also went into five editions, with updated text each time, and was the pre-eminent work in its field until the publications of John Cary nearly a century later.
Paradoxically though, much of Moll’s atlas was based on Morden, a fact he acknowledged in his Preface, Moll was not slow to claim responsibility for correcting, with some justification, many of the errors that allegedly abound in the Camden text. Moll was also keen to express much personal satisfaction with his display of coins and local antiquities that border his maps and make them both attractive and informative, indeed his preface enthuses not only on these factors but also on the standard of his map making where he felt that his accurate depiction of county boundaries on contiguous maps was better than anything previously
published.

You have not viewed any product yet!

Richard Gardner @GardnerAntiques
9 hours ago
This #antique #silver #paperknife is now on my website https://t.co/UUa4oXVWA0 sale! Take few minutes to see this and many other wonderful things! https://t.co/NaW98RYiQQ
View on Twitter
0
0

Richard Gardner @GardnerAntiques
1 day ago
Just added to the website https://t.co/wFScLQDvor is this lovely #antique all #silver #clock #inkwell for your desk! Check it out! https://t.co/abjkLoSvzc
View on Twitter
1
0

Richard Gardner @GardnerAntiques
2 days ago
In today’s Weekender https://t.co/1J1BCFyY8h new stock and an update of where we are! https://t.co/QMDV3QnRoj
View on Twitter
0
0

Richard Gardner @GardnerAntiques
3 days ago
This pair of #antique #victorian cast iron #garden #urns will be the last item added to the SALE later today! Check out the website https://t.co/wFScLQDvor Update in tomorrow’s Weekender! https://t.co/C3naRJOPv6
View on Twitter
0
0

Richard Gardner @GardnerAntiques
4 days ago
I am supposed to be switching broadband providers tomorrow (Friday) to #vodafone
But the new router has still not arrived, they keep sending to the wrong address despite being told 5 times now!
Not impressed at all!

Richard Gardner @GardnerAntiques
4 days ago
This very comfortable #antique #georgian wing #armchair will be added to the SALE later today! Check out the website https://t.co/wFScLQDvor and Saturdays Weekender for an update! https://t.co/odBCjY7Koa
View on Twitter
1
2